A graph showing a dramatic fall in global sea ice coverage even over the diminishing trend of the last three decades has emerged on the web. 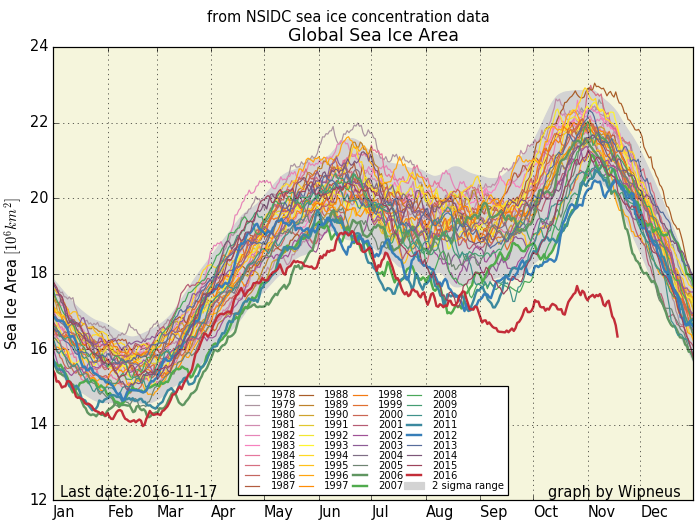 The graph’s creator,”Wipneus”, is a user of forum.arctic-sea-ice.net – a platform with a focus on the polar ice caps.

At this stage it’s not clear how worried we should be.

It is important to bear in mind that the mechanisms driving sea ice formation in the North and South poles are not understood to be linked.

While Arctic ice has seen decline almost exactly in line with rise in CO2 levels, the Antarctic ice levels have followed a more complex pattern that – if anything – show an increase over the last few decades.

This is not a consequence of cooler seas in the south; the warming trend is manifest there as well.

Some discussion on the mechanisms driving this phenomenon can be found at the skeptical science blog although as ever, trying to find simple explanations for nonlinear systems is a fool’s errand.

We could be seeing the effects of this year’s more powerful than usual El Nino in the south, coupled with unusually high temperatures in the Arctic circle (as much as 20 degrees centigrade above average) preventing ice formation. In this case, we may well see regression to the mean next year and the characteristic double hump shape will return.

Alternatively, rising temperatures could have prompted a “state change” and the system is settling into a new mode until an equilibrium is approached.

Many factors will be at work across many scales, from atmospheric composition through to solar activity and even the configuration of the Earth’s magnetic field.

Whatever happens next year it has never been more important to understand and manage our climate.

We urge readers to follow the discussion in the thread.

There is also an excellent article on the popular weather blog http://www.wunderground.com which offers a valuable scientific perspective.